Review of: Half Broke Horses Amazon 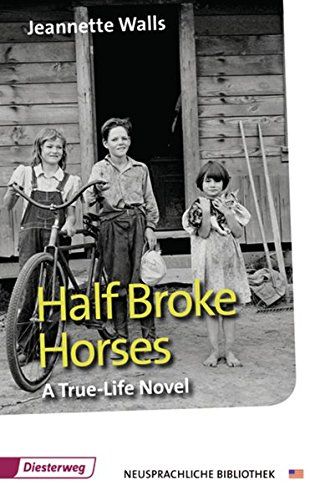 What are Secondary Offerings and Private Placements? $NAOV Spikes 200% then loses HALF its value!

This by no means was a disappointment! Truly thought provoking and heartfelt, beautifully written about a truly inspirational family who can only be admired.

This is a highly evocative account of a woman living in the Southwest States in the s, describing the harsh conditions she encountered in her family life, and after breaking free and struggling to make a life for herself with scant resources.

It is written in an understated and calm manner, which bring the dramatic events, which overtake her into even sharper focus.

Knowing this region well, I was impressed by the depiction of landscape and climate and their inevitable and often doom-laden influence on the lives of the characters.

Altogether an excellent read! I loved this book. Absolutely loved it. This was an easy read for me, in part because I am a horse woman.

But also in part because, although fiction, it essentially dramatizes the sometimes harsh, sometimes victorious, life of the author's real grandmother with a smattering of experiences about her mother, as well.

I felt like I was living their ranch life in the 20s, 30s, and beyond, although their challenges exceeded anything I think I could have coped with.

But they are definitely a likable lot, even if I couldn't identify with their experiences on the range. And it was nice to be introduced to that slice of American culture that few probably actually can identify truly with.

I liked that aspect much, and perhaps, in a way, even envied it, because it depicts such wonderful freedom and comfort in being a self-made woman of strength and character.

This is a good read. The Glass Castle: A Memoir. The Silver Star. Jeanette Walls. A Tree Grows In Brooklyn. Betty Smith.

Neil Patrick Harris. A Life Like Other People's. But our spread bordered the draw, so it was ten times more valuable than land without water, and we were able to keep the carriage horses Dad trained, the milking cows, dozens of chickens, some hogs, and the peacocks.

The peacocks were one of Dad's moneymaking schemes that didn't quite pan out. Dad had paid a lot of money to import breeding peacocks from a farm back east.

He was convinced that peacocks were a sure-fire sign of elegance and style, and that folks who bought carriage horses from him would also be willing to shell out fifty bucks for one of those classy birds.

He planned to sell only the male birds so we'd be the sole peacock breeders this side of the Pecos. Unfortunately, Dad overestimated the demand for ornamental birds in west Texas -- even among the carriage set -- and within a few years, our ranch was overrun with peacocks.

They strutted around screeching and squawking, pecking our knees, scaring the horses, killing chicks, and attacking the hogs, though I have to admit it was a glorious sight when, from time to time, those peacocks paused in their campaign of terror to spread their plumes and preen.

The peacocks were just a sideline. Dad's primary occupation was the carriage horses, breeding them and training them.

He loved horses despite the accident. When Dad was a boy of three, he was running through the stable and a horse kicked him in the head, practically staving in his skull.

Dad was in a coma for days, and no one thought he'd pull through. He eventually did, but the right side of his body had gone a little gimp.

His right leg sort of dragged behind him, and his arm was cocked like a chicken wing. Also, when he was young, he'd spent long hours working in the noisy gristmill on his family's ranch, which made him hard of hearing.

As such, he talked a little funny, and until you spent time around him, you had trouble understanding what he said. Dad never blamed the horse for kicking him.

All the horse knew, he liked to say, was that some creature about the size of a mountain lion was darting by his flanks.

An accomplished raconteur, Walls writes very, very well. She draws you right into her personal history. While reading, I wished it would continue on another pages.

A very engaging read! I read her book "Glass Castle" and loved it so much I wanted to explore her work more.